TLDR: We are releasing new and the last release in the 5.4 branch of Turris OS, this time only for Turris MOX in preparation for Turris OS 6.0. This release will allow us to distinguish between different configurations of Turris MOX and target them during updates. A more detailed explanation follows.

As we are approaching the release of the long promised Turris OS 6.0, we had to make some tough decisions. As you might know, we planned to release it a long time ago already. But because of the state of the kernel present in OpenWrt 21.02 we were unable to make it work reliably. Because of that we had to backport newer kernel version. It made a huge difference and after spending a lot of effort we have Turris OS 6.0 with 5.15 kernel in pretty good shape and ready to release.

Unfortunately we encountered yet another issue. We found a problem in Turris MOX SDIO Wi-Fi card drivers that makes it unusable on 2.4GHz. We could postpone the release once more and delay it even further till we solved that (we are in communication with the chip vendor trying to solve the issue). But after all the delays that we already had, we decided to go forward with 6.0 nevertheless and just temporally freeze Turris MOXes with SDIO on 5.4 till we solve this issue. This way we can achieve both - majority of our users would get new OS with new features but at the same time we wouldn’t break existing setups with SDIO.

After deciding how to progress, we took a look at how to achieve this goal from technical point of view and we found that there few pieces missing. We couldn’t distinguish between MOXes with SDIO cards and MOXes without them. We fixed that, but to be able to postpone the 6.0 release, we have to release those fixes before we release the 6.0. And this release does precisely that. Therefore it is released just for Turris MOX and touches only few packages - effectively switching SDIO MOXes to different branch with 5.4 release to receive 6.0 update later when we resolve the SDIO card issue.

Hope this way we will make everybody happy.

Will be TOS 5.4 for MOXes with SDIO updated until the driver issue is resolved?

This message is not off-topic. It’s regular question.

We hope it will be resolved soon, but in the meantime, it will not receive any feature updates and also not any regular package updates. We will only fix critical security issues in the core packages.

We will only fix critical security issues in the core packages.

We hope it will be resolved soon

I really wish it was, but we know how it was with SDIO wi-fi support from the beginning.

We will only fix critical security issues in the core packages.

And what if SDIO fails to work on TOS 6?

We will cross that bridge when we get there. 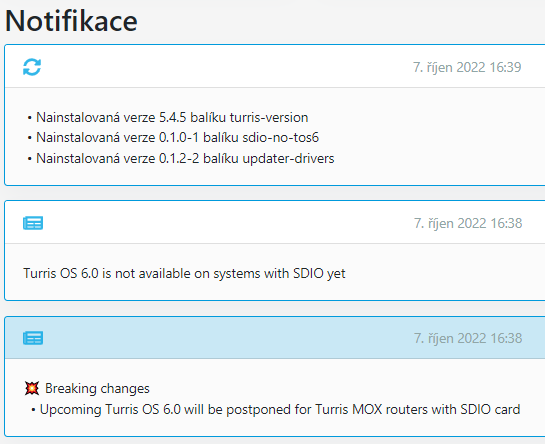 If there is a device in /sys/bus/sdio/devices/* where vendor is 0x02df and device is 0x9141 then updater will run switch-branch --force hbs-sdio.

Thank you for your notification, but we are already aware of that and we are evaluating it.

This message is regular question related to the topic.

TOS 5 will not be updated to a newer OpenWrt version, that is what TOS 6 and TOS 7 is about. TOS 5 will die once we solve the migration to TOS 6 for MOX devices with SDIO. Till then, it will receive only critical security fixes in core packages. And repeating that over and over again would actually keep us from resolving the issues faster.

Thank you again. When will be fixed the wi-fi and SSL issues? These are remote vulnerabilities.

This message is regular question related to the topic.

This thread’s topic is the release of Turris OS 5.4.5, a specific version which was released and won’t change any more.

Any questions related to future releases, issues/fixes that appeared after the release of Turris OS 5.4.5 or the general Turris OS roadmap are therefore unrelated and should be discussed in a separate thread, at least that’s my understanding.

This topic is not common release announcement. It’s also about future versions in TOS 5.4 branch.

Just since you were so concerned, we ruled out most of the Wi-Fi CVEs (one is still under the investigation) as not affecting TOS 5. The code that is affected was introduced in later kernel versions. Regarding SSL, we have the latest stable version of openssl and note that one of the differences between us and OpenWrt is that we use openssl as a default implementation.

But I’ll refrain from going into deep discussions on every potential bug from now, just wanted to show that till we resolve the SDIO on TOS 6.0, we are paying attention even to TOS 5.

Thank you very much for your answer, which I sincerely appreciate.

Unfortunately, turris mox updated itself for me today.