We are pleased to inform you that we have released a new major version of Turris OS 5.0.0 in the testing branch Here be Turtles (hbt)

. This version is based on the latest OpenWrt version 19.0.7 with our features, our userspace setup, and our kernel configuration. There is a lot of new packages, security updates, and interesting new features. Supported routers in this release are Turris MOX, Turris Omnia and there is experimental support for Turris 1.x routers when you are booting from microSD card using Btrfs.

Here there are some highlights which this version brings to you:

More information can be found on our Gitlab or in the OpenWrt changelog. We appreciate anyone, who tested this release in the HBK branch.

If you would like to test this release before it reaches a stable branch, you can use the following command switch-branch hbt, which switches you to the testing branch and if you find out any bugs, please let us know about it here in this thread or preferably write an email to tech.support@turris.cz and don’t forget to include if possible outputs.

Any feedback is welcome.

What’s the most straightforward way for a TOS 3.11.16 to try 5.0.0? I don’t necessarily need to migrate my current settings and can redo them.

What’s the most straightforward way for a TOS 3.11.16 to try 5.0.0? I don’t necessarily need to migrate my current settings and can redo them.

If running the OS from the eMMC on a T or O:

I want to migrate vom TOS 3 to TOS 4 on my Omnia. I know the recommended way: reflashing it with an USB flash drive. In this post Waiting for TurrisOS 4? there is an alternative way via schnapps: schnapps import -f medkit-4.0.tar.gz && schnapps rollback factory which updates the factory image and then performs a rollback. Does it need to be the factory reset or can I just import the snapshot normally with schnapps import medkit4.x.tar.gz and then do a rollback? Is there any drawback to t…

Kernel log does work, but adblock log also Error: logfile not found! Wifi gone, i see it in Luci, but not active

Edit : Ok, used ssh to get in, run pkgupdate, and i noticed some problems with DNS. changed the DNS to ‘use from provider’ and then run the update again. Almost everything works again, only reforris is not working ( yet ) . Thxs for the migration guys

Sorry for replying so late. I am glad that you managed it to solve it. All routers by default with Turris OS 4.0+ points to HBS branch and you need to manually change it by using switch-branch if you want to use a different branch.

I would like to hear more about your issue, which you had, so we can take a look. In OpenWrt 18.06 (Turris OS 4.x), there is being used Python 3.6 and in OpenWrt 19.07 (Turris OS 5.x), there is used Python 3.7 and it might require to do a reboot of your router to apply pending changes. It would explain the issue with Foris. But without logs, I can just guess what was wrong in your case.

If in LuCI was not able to found, I think that updater might be running in the background. There were changes in LuCI and we moved some binaries (in syslog-ng) from different paths to another one to make it work. And even if you do a reboot, Updater will try to recover from the previous run and proceed further when you stopped it during the update.

It’s also my issue. After night update I had to switch from HBT to HBT, only restart won’t help.

Yep, understand that, but i think i needed the syslog working for that? Of does it stash its logs somewhere else and i can still find them?
my rough guess is that it went wrong with the update ( i noticed i’m on HBT , completely forgot about that ) and simply did not do the whole thing?
The update happened at night i think, so my action was about 5 hours later. Reboot did not work, therefore i went for the manual update , to see if that would help. There i noticed it did not find certain packages, so i started to check the internet/DNS part. And that was dodgy.

The DNS thing is strange though…

so far everything seems to work! yay! great work!! thx!!!

‘An error occurred while fetching data.’

also storage in old foris shows ssd twice (but that may have been the case even before 5.0, not sure about it):

will there be a reforis gui for :

and when will the old foris gui be removed?

reForis could be as default in TOS 5.1.

Hi,
The Updater hangs on ddns postinstall, because i have disable 3 DDNS-Configs, after i delete the Lines the update process gos on.
When a config is not enbale the updater schould do gon on in the Process.

Hi,
befor update on tos5 i have trubble with the 2,4ghz WIFI Card. I could not modprobe the ath9k_hw kernel Modul. After the update ich con not modprobe mac80211 module. It does not response any error massage?
I have moved the Card’s because ich put in a SSD on the mSATA Port.
My Config ist from left the 2,4ghz card, the 5ghz card und the mSATA SSD.
Can anyone help me?

Why is the vmalloc only 240MB great?

can i change the size of the vmalloc?

If any plugin in ReForis shows you the following message, we need more details.

‘An error occurred while fetching data.’

In this case, I would like to know if the version of reforis-snapshots-plugin is 1.1.0.

I am using Firefox and Google Chrome on different OS and I am not able to reproduce your issue: 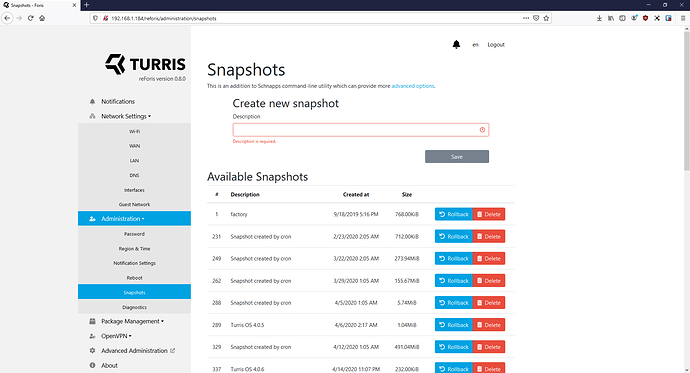 reForis is still in development and it is experimental. We can not replace old Foris GUI for now, because of the reasons, which you said. There are some plugins, which need to be written, tested and added.
You can develop your own plugin with backend for reForis. The source code can be found here: https://gitlab.labs.nic.cz/turris/reforis

And netmetr is already done and can be found in Turris OS 5.1.0, which is in branch HBL. New features shouldn’t be added to HBK due to feature freeze.

also storage in old foris shows ssd twice (but that may have been the case even before 5.0, not sure about it):

This issue is not in Foris itself. If you are going to take a look for example on output of blkid, The hard disk is detected as /dev/sda and it has two partitions /dev/sda1 and /dev/sda2. This depends on your disk partitioning. The same output you will see in the operating system.

In this output, I see what went wrong. It failed because the hash of the file, which you downloaded does not match the one, which you should have. You can try to run switch-branch hbt once again.

After update of my Turris 1.1 from 4.0.6 to 5.0.0 I can not enter router’s web pages (Lighttpd) configured on HTTPS due to SSL_ERROR_BAD_MAC_ALERT error. There are two different certificates, one for internal and the second for external access in the config file for ssh.
Is there some solution?
Thanks.

Just to be sure, the DNS setting in reforis. Normally and with tos4 and 3 on my omnia i have the setting on internal DNS resolver with DNSSEC support. When i use that with TOS5, it gives errors.

If i set it to use ISP, no problems.

So, is this how it should be? Or am i missing something/is internal DNS resolver still not 100% ?
thx, Dikke