Turris OS 5.0.4 is released in the HBS (Stable) branch

It is a pleasure to inform you that we just released Turris OS 5.0.4 in HBS (Stable)

Highlight of this fixup release:

What has been changed in this release?

You will be updated to this version automatically. If you are using updates on approval or delayed updated, you can apply the update in Foris.

As always, we appreciate any feedback regarding this release.

Since Turris OS 3.x release:
This time, there was no any ddns-package update, so you don’t need to worry about, but if you came from earlier versions of Turris OS, be careful!

And I got ~20s internet connection interruption when updater restarted network interfaces. This isn’t good thing to have during a work meeting. Are there any chance to do automatic updates only during night?
I don’t wanna to switch to approving the updates, but I need to have no interruptions during working hours.

So far openvpn seems mostly stable. At least doesn’t appear to be crash-looping.

not here. Openvpn has been looping in 5.0.4 since the update.
with this kind of logging

Looks like openvpn is not working. Technically i am connected, but cannot reach any device IP.

I have set delayed update (48h) and delayed restart (3days at 3:30). I just returned from holiday and before I was able to approve the update, it was auto approved, installed and… restarted. At 21:27. Not in night and 3 days earlier. Why? 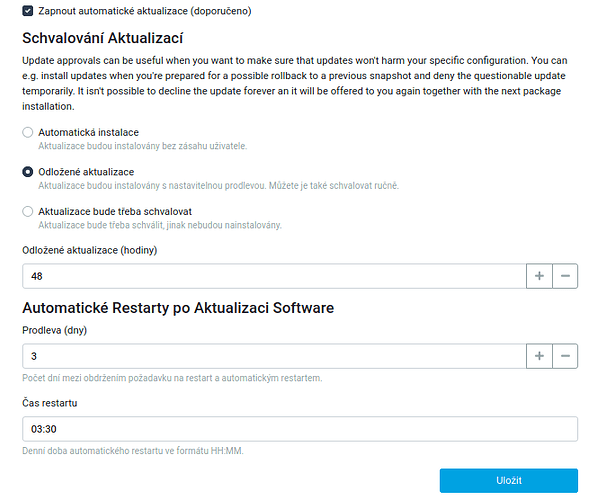 I updated this morning from 5.0.2 and everything seems to work fine. My system is pretty vanilla with only UPnP installed though.

I haven’t used the WIFI modules for awhile as they were unstable but am pleasantly surprised to find out they work great now!

Thanks for the great update.

It seems after some time within 5.0.x SATA HDD RAID NAS issue were reintroduced. I am using 5.0 stable from automatic migration from 4. stable, however I’m guessing from 5.0.2, I’m not 100% sure which exactly. SATA is working properly on one port only. Other HDD fails, symptoms as in old post: https://forum.turris.cz/t/sata-hdd-issues/1173/160