I have recently received my Super Classic Mox (A-G-E) with SDIO WiFi card.

MOX booted for the first time, but later on I had problems to boot. Typically it was hanging in a state where the LED is just turned on. So I decided to flash it from USB but again no luck.

I have used the UART cable to see that there are problems with accessing the SD card:
mmc1: error -110 whilst initialising SD card

It indeed helped to eject and insert the SD card back, but still the MOX booted in 1 case out of 20.

Finaly I have removed the SDIO WiFi card and suddenly the MOX started to work as expected. No issues with start and no issues with flashing from USB.

I was surprised to see, that one of the connectors used by SDIO card is soldered to the USB port and connected by extra wire to one of the chips as pictured below: 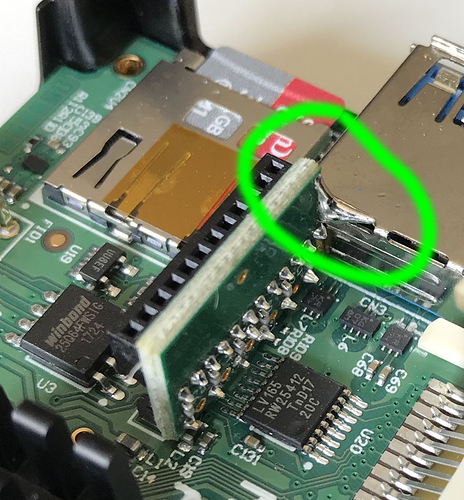 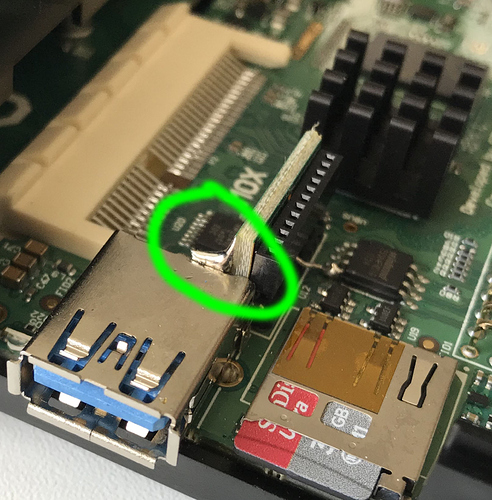 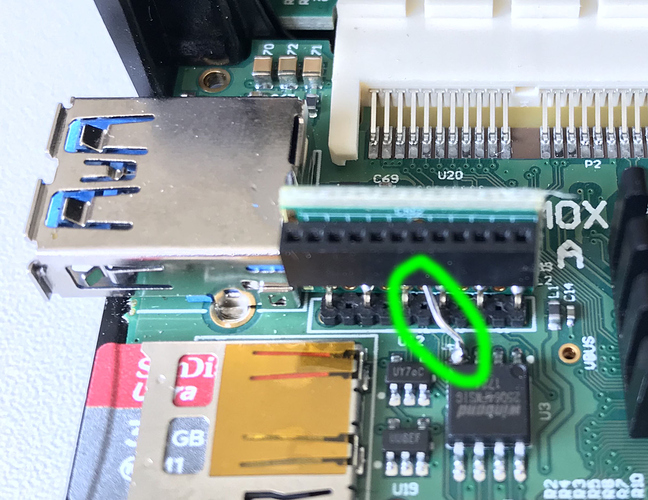 Have anyone else seen something like this in his MOX with SDIO WiFi card?

Seems to be related to various people reporting HW problems with SDIO Wi-Fi module, check this thread or this thread. My device clearly has this hotfix. Given there also seems to be a bad contact somewhere, indeed could imagine this has side effects.

Thanks @dg1sek! Looks like the soldering is indeed a feature.

@Jan.H Is this expected behavior?

Could somebody who has a working SDIO Wi-Fi module in his MOX please check what he/she gets as output for the following? To me this looks suspicious…

Also, on my MOX “iw phy1 info” doesn’t show anything… seems the whole device driver isn’t coming up correctly. Already tried to reflash the MOX and reset everything, and to reseat the module. Nothing helped. Sigh.

Thanks! Now I know where to search…

So… I found the problem.

The connector on the MOX-A board that goes up to the SDIO Wi-Fi board was not soldered!
I only could find that once I removed the PCB from the plastic housing and turned it around. This is what I saw: 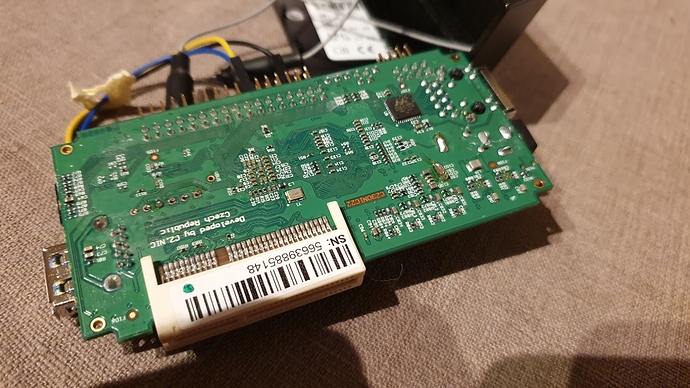 Zooming in a bit (sorry for the bad quality):

After putting a bit of fresh clean solder on these pins (luckily these are not so fine and I could do it with my equipment… couldn’t have done it on the finer ones on my own): 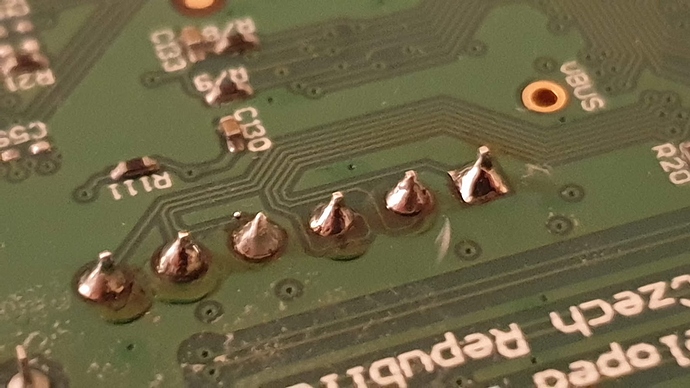 And… tataaaam… WiFi-SDIO module now works (and the grep mwifiex gives me the result it should).

Turris guys… you should have word with your factory…

Would be nice to know how many others have had this issue. It didn’t even come to my mind to check something like this before I sent my device to warranty repairs (with awful results).

@dg1sek : many thanks for this feedback
I have the same issue of Wi-Fi pins not soldered on module A of my MOX, which leads to undetected WiFi card.
I’ve sent similar photos to the support, and I’m waiting to have their answer on how to fix that.

I also have the extra wire, but my USB port is not soldered to the connector, and I don’t have SD-Card or USB issues

So I suppose what is needed is “simply” soldering these 5 pins.

Honestly these are easy to solder even for beginners. IMHO you don’t take much risk in just doing that and see if it fixes your problem of the SDIO Wi-Fi being detected or not.

Not sure what you mean by “I also have extra wire but my USB port is not soldered to the connector”???

I believe that is a reference to the images I submitted. There the USB port is somehow soldered to the board.

Yes, sorry if I was unclear.

Regarding doing the soldering ourselves, I suppose it voids the warranty, right?

OK thanks for clarifying. The soldering of the PCB against the USB port was not present in mine neither, and the little patch wire was present in mine, so it seems that you have exactly the same hardware as I had. I think the soldering of PCB against USB mainly gives the whole thing more stability so that it doesn’t move plus a better GND connection.
I have no clue if resoldering the 6 pins voids the warranty or not (and I don’t really know what legal warranty actually applies to something you buy over IndieGogo campaign participation) - but it definitely fixes the problem to resolder those pins. (However other problems remain, so maybe you are right being careful with ‘warranty’).

Hello, my (campaign) MOX doesn’t detect SDIO wifi card. I noticed the riser adapter card is soldered only on 1 of 6 pins. Is it supposed to be like that? [connector] There are a lot of posts about SDIO wifi issues, but I haven’t seen any pictures of MOX A underside. Are those pins used? There are a lot of pins (8 + 7) for SDIO.

Good news : my Mox A has been fixed by Turris support.
The pins have been soldered properly and the second WiFi card is now detected.

It took around one month with the shipping delays :