Last weekend I did full factory reset (mode 6) because I had also troubles with restart.
Even if I did not set anythign special since first install after this new initialization all problems gone. Restart is smooth and MOX is stable.

And also the WiFi does exactly what described @Ondrej_Caletka at the beginning of the topic. I have two RPI Zero W connected to MOX and they are for whole week rockstable on WiFi and anytime reachable. Which was not the case before reset.

is there any estimate when the issue with multiple SSIDs will be fixed? Will/can it be fixed at all?

Hi, anything in this regard @Ondrej_Caletka? (highlighting you as you opened up this topic…)

Hi, unfortunatelly this bug nas not been solved yet - from my point of view … Old Turris 1.0 know this perfect, new one (mox) doesn’t work with the same settings…

Yesterday, I’ve had an informal chat with some developers. The Linux driver is actually only a wrapper calling functions of a proprietary firmware, which is most likely the source of all issues. So the developers are more or less locked in by the chipset vendor, who does not participate very nicely.*

Therefore I personally would not expect any improvement any time soon. Should you need a proper working Wi-Fi, I would recommend either another MiniPCIe card within MOX B or MOX G or some proper USB Wi-Fi dongle.

*) I also heard something about a dead horse, although this was probably meant off the record.

Great, I bought Turris MOX Start with SDIO wi-fi module as AP for my Omnia with multiple SSID.

In that case, you can always try to use your warranty. Since this limitation was not documented before and actually is not documented even now, that’s probably the only way forward.

Cause the MOX is not able to play the role it was intended (and offered) for. And the future is darker and darker.

Any official statement from Turris team?

Sorry for not bringing any news for some time, truth is, we are still investigating and discussing with the supplier and we still don’t know which of the advanced features can be fixed and when.

Thanks for the update. Does your discussion with the supplier also, in addition to the problems with multiple SSIDs, cover the stability issues of 5GHz WLAN as mentioned by @Ondrej_Caletka in the first post of this thread?

Great question, same interest here. Multiple SSD can be some omitted even if it is painful.

But unstable 5 GHz is deal breaker. And unfortunatelly no also 5 GHz. The solution described by @Ondrej_Caletka and also tested by me was holding for about a month. And the even 2.4 GHz got unstable again.

I was trying to figure out for hours why I could not have multiple SSIDs… turns out it is a hardware defect and also not not working with 2.4g either! I consider this a hardware defect because the hardware supplier won’t fix their drivers! I am a little disappointed by this. I am in the United States, it’s a little difficult to get more modules for the Mox here, so this thing will be relegated to a single 2.4g signal and stored in my closet as a dump AP. I hope cz.nic will be sending replacement parts soon! I received mine from being a kickstarter backer.

Unfortunately I cannot connect more than 8 devices to 2.4Gh SDIO. Is it also known issue?

SDIO module in MOX functionality is somehow locked with channel 36. I have tried to set another channel or automatic and SDIO module stopped working. It took me sometime, but I finally made it working as netboot, two wifi modules with the same SSID. I have HBT branch means TOS 5.1 latest update.

A post was split to a new topic: SDIO Wi-Fi card issue on 2.4 GHz

It turns out what was stated to be fixed

edit: … is fixed (at least for running 3 SSIDs on 5GHz mode and channel 36). Thanks alot to Turris team, you are fantastic!

There’s some small thing that drove me absolutely crazy (which is by no means the fault of the Turris guys - this is an OpenWrt problem): Even if you are parametrising a 5GHz-SSID you have still this options in luci configuration: 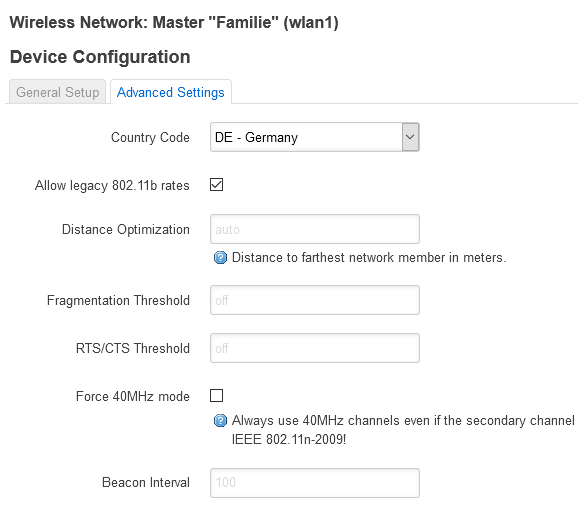 grafik578×521 8.57 KB
And if you uncheck the box for 802.11b legacy rates (equivalent uci option option legacy_rates '0') the complete cards will not come up until you delete wifi-configuration and reboot your MOX. And this might also be the same if you choose “force 40MHz mode” (equivalent uci option option noscan '1') - those options only belong to 2,4GHz networks and the mwifiex_sdio will crash if their default options are changed in luci.

What doesn’t work either is uci option option require_mode '<n/ac>' (at least for 5GHz band) which is quite nice to force older devices to fall back on 2,4GHz band and leave 5GHz band to the newer devices.

Correction:
Signal strength is still very low. I will write an email to turris support about this topic.