We use several MOXs for our projects and this device suits us very well with its flexibility. Quite powerful CPU with support for containers. But we have found several times that a module with an independent power supply would be very useful. Something like an “integrated UPS”.

After a long search, we found some similar solutions that would help to be a reference to the design of the new MOX module.

There are relatively similar solutions for raspberry computers (and other SBCs). But they are usually only with 5V output and lack many details that are very useful for use with MOX.

And then we wrote down requirements that would be useful for us and other MOX users. Here there are:

Advantages of that solution: 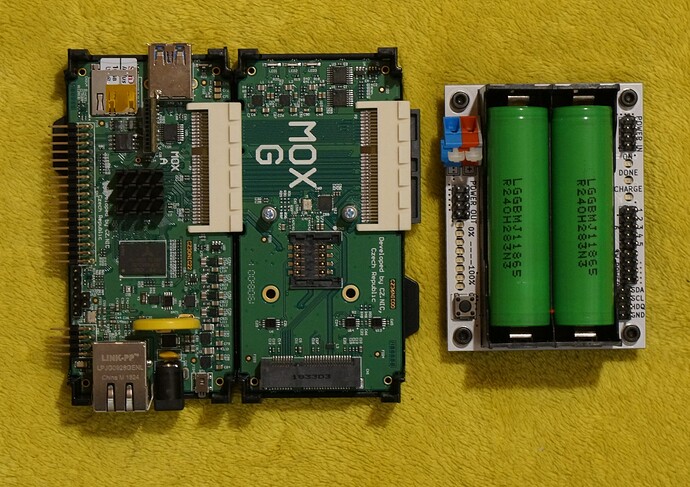 Similar to the power input on the F MOX module

There are two possible ways. It is currently unclear to me what is the best.

I would like to know if there would be interest in such a thing (from the community and from CZ.NIC), because I think that it is quite a useful MOX module.

A nice idea. However, i think that normal UPS is a better solution because in case of a power failure a power back up just for the router might not be enough. What help is a running router when computer, monitor, NAS and so on are breaking down?
But if your are running the router as NAS than it may be useful when the router supports communication with the UPS for monitoring and controlled shut down.

Hello, I like the idea and it looks thoughtfully detailed. I use Mox and the fact is that such a thing would be quite useful.

Despite that, I have to oppose to the answers from @forenuser. That is enough for many people today. To backup only MOX (Wifi-AP) and some modem (internet source). Today, many people work on laptops/tablets/smartphones that have their own battery. And the monitor … will last for a while without a secondary monitor. The desktop computers and monitors have large power consumption. So there makes sense to have your own backup power supply (if needed).

Today, mox can largely replace NAS services (nextcloud, site hosting, simple web applications, …)
Even today, there are many places where the electrical network is very unstable and there are power outages.

I can very much imagine the usefulness of this thing. Whether it’s just the compactness and design of MOX or it’s mechanical durable, no additional wiring, …

If such a thing got on the market, I would definitely be interested in it. I believe that CZ.NC could also took this thing as marketing. That they have a network gateway with a built-in UPS/battery for selfpowering.

If you want or need to go online you will need a powered modem (obviously). So as long as there is no xDSL or DOCSIS modem option for the MOX or the SIM option is installed just a MOX power back is not enough.

I think the average consumption of such device is enough small to run it quite long.

He also wrote of an max. current output of 1.5A. I have no xDSL modem for comparison but at least my DOCSIS modem requires 12V, 2A.

Don’t get me wrong, i like the idea and i know that this is a brainstorming phase.

Yes, I had written 1.5A@12V but it is a starting point for a discussion. I think there are plenty of modems that are satisfied by 18W power input.