Does this look right?

I’m experiencing some weird disconnecting behavior lately and trying to investigate. In this process i noticed the high temperature (92 deg. C). I know TO’s run rather hot but over 90 deg. C seems a lot. As far as i can remember this never got that high, maybe to mid 70’s.

Next what caught my eye was the usage off the processor. It looks as if it always is 100% utilized. Looking at similar graphics from other (older) posts than they look different (maybe they run another TOS version? Mine is V4.0.5).

Can someone confirm if this looks right? 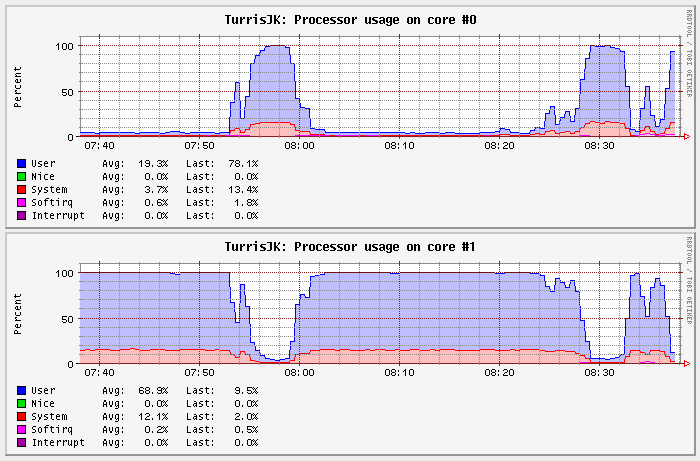 That doesn’t look right at all. What’s even more odd is that the usage seems to go up on core #0 as it goes down on core #1.
Maybe check what process/processes are using up the CPU? Status -> Processes in luci or with top in ssh:
top -o ‘%CPU’

What’s even more odd is that the usage seems to go up on core #0 as it goes down on core #1.

That part seems not odd to me. The OP probably has one thread/process that consumes all the CPU time it can get – and at some point Linux scheduler decides to switch it from the current CPU to the other one.

In any case, I’d certainly start by finding out which process does it.

Tanks guys for your quick response.

The only process i could spot with a significant CPU usage is Luci? All other processes have a sub 1% cpu usage.
Strange that Luci occurs twice.
Would this be causing the excessive cpu usage?
Can i just stop it?

@vcunat That’s true, still odd that it decided to switch cores all of a sudden, but that does seem to be what’s happening here.

I tried to hang up, terminate and at last kill the instance of Luci. Killing it seemed to definitely “kill” it (who comes up with these names; what is the difference between these options?).
Up until now only one instance of Luci remains. The processor usage is down to a few percent and the temperature is down to below 80 deg. C. All seems good.
As working from home is the new standard with this corona pandemic I cannot reboot the router at the moment. I will try this later and see if the second instance stays gone.
Then i also hope the weird disconnects have also disappeared. Looks promising.

Scheduler uses lots of heuristics. It’s not meant to do perfect decisions (not feasible anyway). And perhaps there actually was a good reason to do the switches in the particular situation

Two periods per half an hour – that seems rare enough to me.

Killing it seemed to definitely “kill” it (who comes up with these names; what is the difference between these options?).

Old UNIX terminology. TL;DR: “terminate” asks the process to shut down, “kill” just does it.

In computing, kill is a command that is used in several popular operating systems to send signals to running processes. In Unix and Unix-like operating systems, kill is a command used to send a signal to a process. By default, the message sent is the termination signal, which requests that the process exit. But kill is something of a misnomer; the signal sent may have nothing to do with process killing. The kill command is a wrapper around the kill() system call, which sends signals to proce...

the real reason to not use sigkill

Thanks, I love these educational moments (and very well illustrated).