No wifi in mox A with MIMO module

I opened the device to plug in a sd card and flash the firmware (which worked) and I could see there’s an extra card in there with antennas wired but I can’t get wifi to work.

We were unable to detect any wireless cards in your router.

dmesg doesn’t seem to show the wireless card either. I sent the result of the “Forris Diagnostics” tab to tech.support@turris.cz.

For what that’s worth, the red led is flashing, about twice per second, with a pause. Not sure what that means either.

I was able to connect the device to the internet, as a DHCP client, because it’s supposed to act as a bridge for my other Turris Omnia machine.

Thanks for any help

Hey, did you resolve this? I seem to have the same problem…

i opened the box, took off the wifi module and reseated it. and now it works.

Sweet, thanks! That did it for me too!

Taking SDIO module off and putting it back in, didn’t fix the issue for me. I still only see WiFi on Module G.

But yeah, this SDIO module was almost ready to fall off, and one of it’s antenna cables was disconnected also. Looks like way it’s attached to Module A doesn’t survive shipping.

I have a similar issue on a AGE configured MOX. Both antenna-cables where disconnected from the SDIO Module. In addition, there is a small solder-bridge from a chip on the A-module to a socket of the SDIO module. 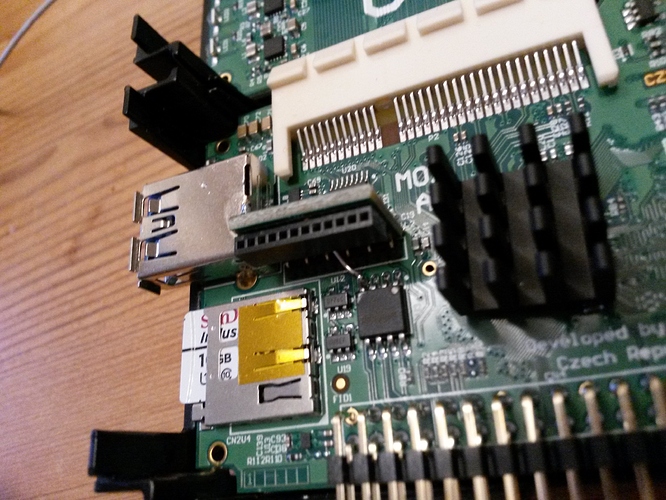 I connected the antenna-cables and reseated the SDIO Module, and disconnected the Wifi-mPCIE-Card from the G-Module.

Now Foris runs into an exception, when opening the Wifi-configuration, LuCi shows a “Generic 802.11 Wireless Controller” but scanning for wifi is without success.

dmesg has no hints for a wifi card and wifi status does not list any interfaces, as well as iw list.
@alump did you already figure out a solution for this, or reached out to the turris-team?

(Off-Topic: I didn’t expect the G-Module to have a SIM-slot, though!) 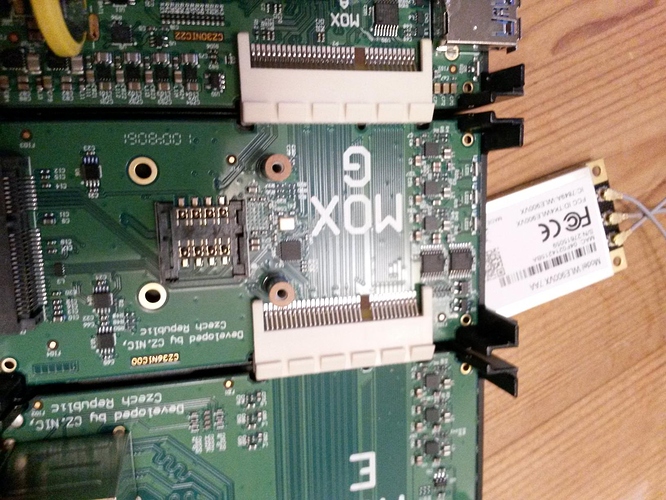 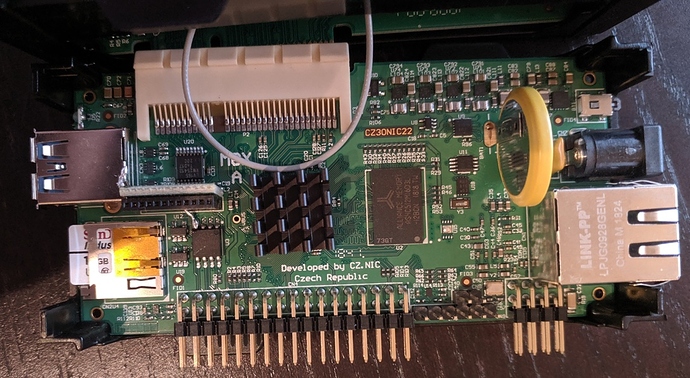 I also have that same solder-bridge, so I assume it’s a “feature”. But same time, I still don’t have any sign of life on my SDIO WiFi module.

There seems to be a Kernel-Module for the Wifi-Chipset on the SDIO Module:

with this knowledge, i could look for it in dmesg, the result does not look promising:

My device doesn’t even try to load firmware. Only mention of mwlwifi is on installed packages list. Also no mention of mwifiex_sdio on dmesg. So I’m stuck with totally dead SDIO module (or dead SDIO connection on Module A)… hard to tell as there is no documentation on hacks did when they found issues with these modules before these were delivered.

Just pretty annoying, as I’m trying to debug my Mox’s hardware issues over distance of 10 timezones.

I’ve just reached out to tech-support because of this issue.

And just to not confuse people, by solder bridge I mean this hack on Module A. It’s most likely feature as I told, so some jumper patch/hack. 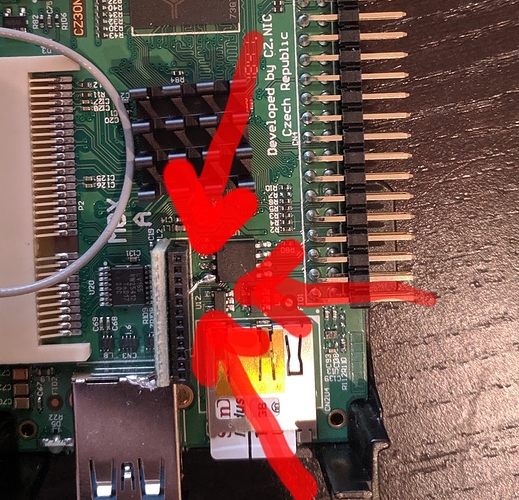 So I think this was my last Turris router. Was fun as long as it lasted. Luckily my Turris Omnia is still working after all these years, hopefully it has some years left still, before it’s impending eMMC dead arrives.

And Mox is still useable also without SDIO module. Annoying just that all money i spent for G upgrade, and SDIO were total waste of money. As I would have got G anyway without paying for it. And SDIO was dead on arrival.

hopefully it has some years left still, before it’s impending eMMC dead arrives.

Even that moment doesn’t need to be the end; see System on mSATA disk (but I guess that’s me shifting off topic)

Same experience here. My Mox arrived yesterday, no issue with initial setup, but WiFi (which should be there) is showing just “We were unable to detect any wireless cards in your router.”.
I tried reseat it, with no luck.
I tried replace it with another WiFi module (which I have for a fried who did not order it initially, but wanted to get it shortly before I ordered), and the same situation, the same error message.

Going to write to support and ask for replacement… :\

Same experience as @Orin, unpacked my Mox yesterday and no WiFi detected… created ticket on tech.support.

Any luck with tech support? I have basically the same issue. Only Wifi-mPCIE-Card in G module is working flawlessly, module A wifi wasn’t detected. So I opened the box and realized that both antennas were disconnected and cables in position that it was obvious that they weren’t connected during Mox assembly. After connection I managed system to detect module A wifi card and it was working until I tried to assemble plastic box after wich wifi stopped working again. I repeated disassembly and assembly multiple times but haven’t managed to make it work in assembled state. There must be really something wrong in wifi card connection to A module.

We received a ticket from you about thirty minutes ago. We are working to solve this issue as much as we can. There was a weekend and as we are replying only during working days, it takes time. We are aware that this issue for some people happened. To sort out this issue, we need to receive some MOXes back, which was delivered.

We will reply to all support tickets and as well here when we will know something more about this issue.

We are really sorry for any inconvenience caused by this error.

I know that you want to share some details with others. We are trying to satisfy inquiries as much as we can. If you don’t like the given solution just tell us and we will try to do it better and figure out something, what you might like.

Sorry, but I have given up debugging my device (as mentioned i’m 10 timezones away from my Mox) - it’s not worth the any extra trouble anymore. But hopefully you can help other people on this thread with similar issues, and then share what you find.

Any luck with tech support?

@kronwell I did not receive an answer, yet. But that’s ok. Even the Turris-Team needs a weekend, and I’m quite optimistic that there will be a good solution at the end, even if it takes a little bit more time.

From my point of view, the rest of the hardware at my place is working quite well. I seem to have encountered some software glitches, which I didn’t report as I can’t reproduce them (they might be a result of misconfiguration made by myself).
me