Ok so this is a bit of a strange situation. I think a lightning strike on the phone system around 100 meters from our house may have fried the WAN port on one of My Omnia routers. There’s no longer a link light when I connect an ethernet cable to it. When I do the same on my other router, with the same config, there is a link light. I’m also seeing “NO CARRIER” on the broken one in the “ip addr” output.

The question I have is, given this WAN port shares eth1 on the CPU with the SFP port, what are the chances that that might still be ok? The reason I have two is that I’m planning to use fibre to extend our network to another building anyway.

I don’t have any SFPs to hand to test this yet (I was about to order some) but if anyone can comment on how this shared port is wired up internally and whether it’s likely both are gone, this would be helpful.

Same thing happened to me. Mine was less damaging where the lightning fried only the gigabit circuit.

There’s a good chance your SFP is OK since high voltage typically fries just the transformer or circuitry around the ethernet port.

The SFP port has probably better

Probably only two ways to find out:

There’s a good chance your SFP is OK since high voltage typically fries just the transformer or circuitry around the ethernet port.

That is lucky and could vary with the power/interval of the surge. If the PCA9538 microcontroller got fried too it would be goodbye for the SFP as well.

how this shared port is wired up internally 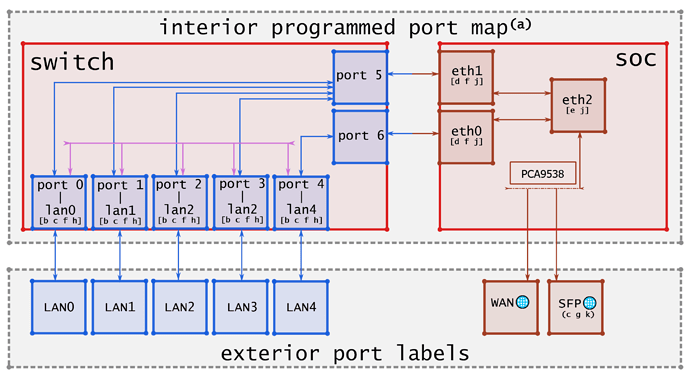 Looking at the WAN wiring schematic and physically inspecting both sides of the board it looks like there’s a fair bit of “stuff” that’s distinct between the Ethernet and SFP paths. I’ll get some SFP’s to try this coming week.

There’s no visible damage on either side of the board. Realistically though I think there are only one or two components that my surface mount skills could cope with, the rest are way to fiddly. I’ve asked Turris if they can sell bare replacement motherboards just in case I need one. 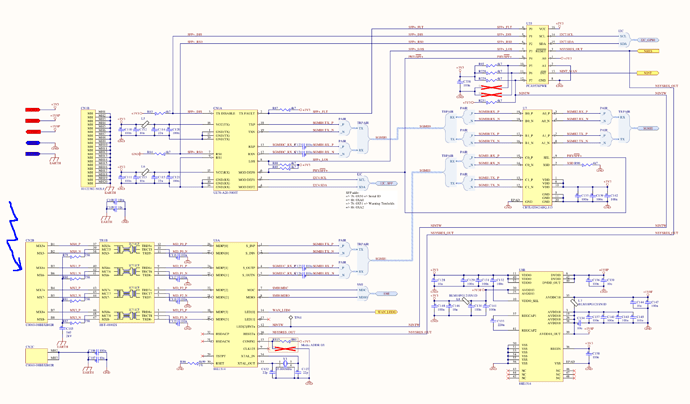 Lightning came in where I’ve added the blue jagged arrow.

That is now the third case of a fried WAN port on a TO by thunderstorm activity I came across. Wondering whether it is fostered by (less expensive) UTP | EMC compliant (Smith termination) cabling between the area where the lightning strike hit and the line subscriber premises, assuming that the ISP’s concentrator provides sufficient surge protection and the surge is not carried over from the ISP’s concentrator but rather the result of the strike generating an electromagnetic pulse that coupled into the cable somewhere along the path and thereby induced a surge current.

Unless the router being used outdoors but then probably would have been fried entirely.

There’s no visible damage on either side of the board.

That sounds promising at least.

The strike seems to have fried most of the electronics in the houses directly connected to telegraph pole. Houses one or more hops away have largely lost VDSL modems or one or both of the modem to router WAN Ethernet ports.

I also lost a PS4 power supply (it was on a surge protector) a Wii AV port, the VDSL modem Ethernet port and a TV signal splitter/booster :-/

Count me in (4rth case) of Lightning Strike and fried wan port.
The router was used outside (i.e in a electrical pillar box) but only wan was fried as the cable was larger than 10m. I use mainly Lte for wan, so I just reassigned Lan4 to wan and didn’t test sfp.
Maybe cz.nic should consider adding surge protection to the wan port in the future (as decent ip camera manufacturers do at least for outdoor ptz cameras)

In a way the WAN port getting fried is kind of a simple surge protector (circuit breaker) that prevents the remainder of the board from getting fried too. It would be less of a hassle if the WAN onboard RJ45 jack would be easily exchangeable.

Integrating a surge protector into the board, suppose that would mean a regulator/transformer (in lieu of an external arrestor), will only work within the specifications of such protector and in the event exceeding the specified protection limits would get fried too, unless the protector has a fuse switch that pops during a surcharge and that can be reset afterwards.

I would reckon the first place is the shielding (surge immunity) of the cabling leading up from the ISP’s (also power provider) junction box to the WAN port, always assuming that either provider has proper surge protection in place at the last junction box prior branching off to the customer premises.

Apparently subsurface and aerial cabling is susceptible to indirect lightning side flashes all the same https://keystonecompliance.com/lightning-and-surge-testing/

The indirect effects of lightning on electronics can be significant. The sudden rush of electromagnetic energy and voltage is carried by device’s cabling. The surge of energy can damage cables and connected components as it takes a path of least resistance. The indirect lightning effects can be originated from the ground, power lines or metal objects that the device is either connected to or near.

Your mentioning cable lengths greater than 10m prompted me to check the other LAN ports as two of them have runs of solid core Cat6 that’s around that length. Sure enough, LAN2 is fried too. Bizzarely, the other port with the came length cable is fine.

The TV splitter/booster that went had numerous long TV coax connected too (as well as a sizable Yagi).

I think external or inbuilt protection for WAN ports that are connected to copper telephone system wires is pretty much essential based on our local experience here. Having spoken to a number of friends around the UK about this it seems especially common in rural areas.

two of them have runs of solid core Cat6 that’s around that length. Sure enough, LAN2 is fried too. Bizzarely, the other port with the came length cable is fine.

Are the two cables of the exactly same specification, 6 vs 6a and shielding U/UTP vs S/UTP vs S/FTP vs S/STP?

The other LAN connection that is identical in terms of cabling to LAN2 is ok. I don’t know which port is was, but it was connected to a switch port on an old Buffallo ADSL2 router that I’m using as an AP.

Both the solid core Cat6 have identical wiring to a twin ethernet wall socket.

I’m guessing it’s likely that a component that’s common to both the copper WAN and LAN2 ports is the most likely suspect?

I’m guessing it’s likely that a component that’s common to both the copper WAN and LAN2 ports is the most likely suspect?

The other LAN connection that is identical in terms of cabling to LAN2 is ok.

Sure enough, LAN2 is fried too.

it would not help just protecting the WAN port, apparently. I might be wrong but if the coupling of the electromagnetic pulse, emitted from the strike, into the cable core is aided by on-premises unshielded or weak (tinfoil) shielded cabling it might be worth to look/invest into proper shielded cabling.

I might be wrong but if the coupling of the electromagnetic pulse, emitted from the strike, into the cable core is aided by on-premises unshielded or weak (tinfoil) shielded cabling it might be worth to look/invest into proper shielded cabling.

My little experience (not an expert on this) with outdoor cabling is that when copper cables are larger than 10m no matter of the shielding, you need a surge arrester at both ends. This is also the case for coaxial cables.
In my case, 4-6000V builtin Lightning Protection, Surge Protection and Voltage Transient Protection of ip cameras proved to be sufficient for the past 5 years in many occasions (when omnia and other equipment including cameras with coaxial cables where fried).