I am about to buy a Turris Omnia, a product that I find more congenial than the MOX, because Omnia has an SFP port, which is what I need. Unfortunately, in the country where I live (in Italy), the product cannot be easy found in online stores. The only seller I found on Amazon is the one in the photo. Question: does the code of that model exist and what does it refer to? Is the price too high? Suggestions are welcome. 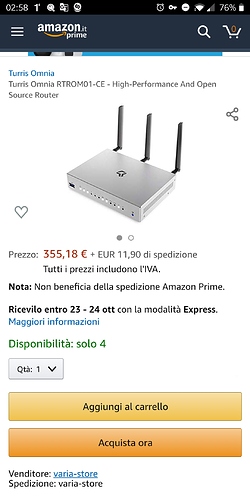 Varia-store is an official reseller. But I can’t tell about the code.
The price seems indeed really tough - on amazon.de you pay 269 EUR (seller: cz.nic, fulfilled by amazon). Maybe buy on amazon.de and pay a little more for shipping?

Thank you for your answer. As for the product code, I discovered that it refers to the year of production of the 2GB version (which is what interests me) from 2019. On the German Amazon the only version sold by CZ.nic is the 1GB one, while the 2GB one is sold by another non-Amazon seller at a very similar price. I then found another online store, always official dealer of the Turris, which has a slightly lower price and which inspires me confidence, because it is very fast in the answers. I think I will make my purchase with it (discomp.cz).

the product cannot be easy found in online stores

I believe https://discomp.cz has been reported here to ship internationally, and currently they list price of 309 Eur (without shipping).

In fact I will choose to buy from discomp.cz
Thanks.

I am about to buy a Turris Omnia, a product that I find more congenial than the MOX, because Omnia has an SFP port, which is what I need.

Happy omnia user here, but you know about the MoxD SFP-module?
The base unit https://www.discomp.cz/turris-mox-start_d90848.html?fulltextword=turris%20mox and the D-module https://www.discomp.cz/turris-mox-d-module-sfp-boxed-version-_d90948.html?fulltextword=turris%20mox should cost around 177 EUR including VAT, considerably lower than the omnia (albeit without a switch and without wifi).

I saw it and it seems like a good thing, but for what I need Omnia is the most complete solution. Thanks anyway for the advice.

I do not recommend to buy omnia or mox if you want to use it for a regular usage and not only as a toy for playing (for that I recommend rPI or Arduino).
Mox is very unstable device even if you use it only with installed packages. plastic box is very bad designed and constructed.
Omnia will die very quickly (check eMMC failures). you can add SSD and use it again, but its a bit difficult for a standard end-user to replace internal storage for SSD.

An eternity has passed since I wrote this post. I agree with you both for use as a development board and as reliability from a home router. Unfortunately for me I have already made the purchase. After a very short time he returned to his box (Omnia) and I no longer even have the incentive to look for new bugs. The little game has tired me. For my digital world and as a server for my home I use something else.

I have an omnia from the campaign and it still works. So don’t believe the bullshit about the omnia being unreliable

Omnia that gave you the company is not the same as what you buy. Plus, you have no right to question what others say. Everyone talks about their experience. If you feel comfortable, this fills our hearts with joy, but nobody asked you.

I don’t know, it really depends. I bought Omnia almost three years ago. Basically no settings were changed (I mainly added samba later), and I can’t remember any real issues with it. People have been using internet from it daily, all those years. (And yes, I had the updates “on” all the time.) In the meantime I rather had a couple issues with the ISP, like them breaking IPv6 for about a week, etc.

Anyway, judging a product from one case is hard (which holds for my case above as well). Sure, “many” people have complained about some issues here on the forums, but note that thousands of Omnias have been sold (and sometimes the problem lies elsewhere).

Not if you use it as recommended, I believe. Yes, people who run containers with distributions on the eMMC etc. will probably run into issues, but such things are warned against.

Plus, you have no right to question what others say.

That is not how a public forum works, you know? As long as we treat each other sufficiently respectful questioning each other’s preconceived opinions and testing the opinions factual foundations with counter arguments/opinions is, IMHO, one of the most important reasons for a public forum, other wise maybe a secret diary might be a better place

Not even calling other people’s bullshit a correct way of behaving.

I’m also someone who’s been running the Omnia daily for years and have had no stability issues or the like so far. Don’t want to discredit people who have had problems, but this is definitely not true for everyone!

Since I find this place really sterile and useless, I want to know if there is a way to delete my profile from this forum.
PS: I just read that it is impossible to delete my account from this forum. In the face of privacy! This place is worse than Facebook!
Not recommended in all its aspects. you do not settle for money and patience, you also want my data.

I don’t mean to sound harsh, but surely you should have considered that before posting in public forum on the internet. If your posts would get deleted, what about all the context? (replies of other people, etc.)

What I have written may remain, but the profile cannot. Above what I said the avatar of a little flower, but my data deleted and no more notifications from the various posts.

PS: I just read that it is impossible to delete my account from this forum. In the face of privacy! This place is worse than Facebook!

Where did you read it? Before saying this, I would rather gather more details about it. For example, this one https://meta.discourse.org/t/gdpr-countdown-and-compliance/87190/15 and we together as Discourse follows GDPR. This means you can anonymize your personal data, but before doing that you should let us know clearly about not just in some thread post. Something like this in OpenWrt forum (same forum software they are using) even there you can not delete yourself account. This approach is usually common by other websites as well. We are not reading all the threads. Discourse, the forum software which we are using is GDPR-compliant way.

Since I find this place really sterile and useless

And here we go again. We had a similar discussion in OpenWrt forum, don’t you think? You were shouting how you can not flash OpenWrt and that I didn’t try it myself, etcetera and then it was user fault, right? It is working as it should.

Now, you have snapshots and it seemed you are satisfied as you apologized to me privately and now we have it again. I’m wondering that you didn’t complain to OpenWrt devs about their bugs and so on.

To me it appears you were using for most of the time dev builds and tried things, which are still in development like reForis and blame as it does not works, but developer builds are for experienced users. This is clearly said in our documentation and as well in switch-branch. There are many people, who does not need to tinker with the router each time and they don’t provide us multiple times negative feedback like you, where it is highly recommended to reply to it to avoid any misunderstandings.

This forum is moderated. Take it as it is. If it wouldn’t be, it will go bad. As I experienced as a regular registered user on other forums.

Omnia will die very quickly (check eMMC failures). you can add SSD and use it again, but its a bit difficult for a standard end-user to replace internal storage for SSD.

Most of those failures were caused by LXC containers and in really negligible numbers there a few users, who were not using LXC containers at all, but running database on the internal storage sounds cool, right? They were just trying how much the eMMC is durable. On our forum, you can find the number of lisepan of the eMMC. If I vaguely remember, it was something about 3 TB specified by manufacturer for 4 GB, but we have 8 GB eMMC.

I would say that standard end-user do not use it in the first place, because it requires using a command-line interface. If you do, then you should know what you are doing as you can not set up LXC containers without that.

If you are doing that you need to know that eMMC is flash memory. What it does mean? Flash memory is, for example, being used in microSD cards, USB flash drives, SSD and also in phones and so on. It has a lifespan of writes. It does not count with excessive writes most often by logs, databases and so on. By default, we have logs in RAM (/tmp), this is not handled by common GNU/Linux distributions in LXC/Docker and its writing to the internal storage if it is not moved. This is mentioned in our documentation.

My post is a longer than it should be, but if you want you can read something more about that in Czech thread - Chyby, které vedou k nefunkčnosti připojení.

It’s a pity that satisfied users does not write their feedback as well. But this is common to all projects.

This topic was automatically closed after 2 days. New replies are no longer allowed.